Opera and Jazz unite in the Marigny – 89.9 WWNO

For the second summer in a row the Marigny Opera House is offering itself as a performance venue to a homegrown small opera company.

The 9th Ward Opera Company is the brainchild of Kathleen Westfall, a self-described “little Cajun girl” who’s equally comfortable singing on stage in New York or going crabbing in Thibodaux. Sharon Litwin talks to her about the two unusual one-act operas she’s presenting this month.

To read more about the 9th Ward Opera Company and its upcoming performances at the Marigny Opera House, visit Sharon Litwin’s article on NolaVie.

Nearly a year ago, classical vocalist and adjunct UNO professor Kathleen Westfall debuted the9th Ward Opera Company, holding public performances of Burnand and Sullivan’s Cox and Boxand Gilbert and Sullivan’s Trial by Jury for three nights in the first week of August. Conceived as an outlet for aspiring theatrical vocalists across the region, the enthusiastic turnout at the company’s initial showing prompted its founder to further pursue its mission. Since, the 9th Ward Opera Company has upheld a seasonal schedule, delivering two performances of a single act opera per night with each run and growing steadily along the way.

With few opportunities to take the stage, the fledgling non-profit has gone on to attract budding vocalists from UNO, Loyola, Tulane, Dillard, Southern, South Eastern and LSU. Likewise, audience intrigue has grown beyond the Crescent City. Taking notice, the New Orleans Jazz and Heritage Foundation awarded the 9th Ward Opera Company with a Community Partnership grant earlier this year, and the company’s forthcoming performance will mark its first with a budget. Tune in below to hear Westfall tell the 9th Ward Opera Company’s tale as well as for what it has in store for its July 25-28 Marigny Opera House showings of Gershwin’s first foray into opera, Blue Monday, and Xavier University professor Dan Shore’s New Orleans-themed composition An Embarrassing Position…

The 9th Ward Opera Company: “From Maid to Mistress” 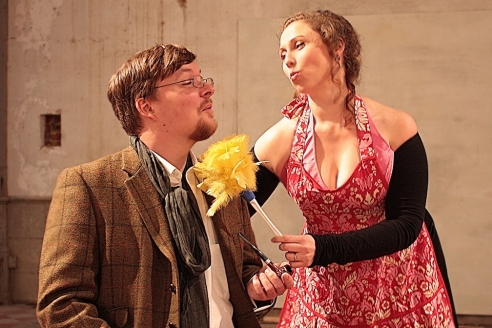 “Frauenliebe und Leben” by Robert Schumann is a 20-minute song cycle that traces the life and love of a woman, presented from her point of view. It will be sung by 9th Ward Opera Company soprano Anneka Olsen, and accompanied by Dave Hurlbert (Executive Director, Marigny Opera House) on piano. This performance will include a newly-commissioned modern dance piece choreographed and performed by Maritza Mercado-Narcisse.

The second half of the performance is the forty-minute comic opera “From Maid to Mistress” by Giovanni Battista Pergolesi. This masterpiece of the baroque tells the tale of a conniving maid and her gullible master. Kathleen Westfall (Director and Founder of the 9th Ward Opera Company), soprano plays Serpina, Jacob Penick, baritone plays Umberto, and local actor Dennis McCann performs the mute role of Vespone. Dave Hurlbert accompanies on piano.

The Liebeslieder portion was an impressive collaboration, and the young singers of the 9th Ward Opera were particularly sharp and poised. Maritza Mercado-Narcisse choreographed and danced along with Donna Crump, J. Hammons and Eric Thileman.

It’s the second presentation by the 9th Ward Opera, which was started by Kathleen Westfall, who is an adjunct professor at UNO and offers voice lessons. She’s a graduate of UNO, when it had more offerings in music, and she went on to sing with small opera companies in New York City.Her interest in the 9th Ward Opera (she chose the name because she lives in the Musicians Village), was to give young singers a chance to perform and to promote opera.

“The New Orleans Opera Association does fabulous large productions,” she says. “I want to do lighter and shorter works, like the Gilbert and Sullivan piece we did this summer.”

“In general, opera needs to do something to stay alive, to be attractive to younger audiences,” she says. “It has so much power, so much emotion. The power of opera singing should appeal to everyone if put in the right context.”

She and Dave Hurlbert, founder of the Marigny Opera House and a classical pianist, wanted to do The Liebeslieder Project. Westfall suggested adding dance as a visual component that would make the piece more interesting.

Kathleen Westfall, a Thibodaux native, is not only an accomplished opera singer and teacher; she really wants to spread her love of this special form of vocal performance to those less familiar with it.

Not that Kathleen is comfortable with only this one form of musical art. After all, she is married to another outstanding musician, James Westfall, well-known jazz pianist and vibraphonist. They live in Musicians Village, their lives totally consumed by music and those who perform it.

Since her observation for some time has been that many vocal arts students in New Orleans have few opportunities to sing, Kathleen has created The 9th Ward Opera Company; the name is a nod to the part of town in which she lives.

The opera company is a summer program designed to showcase a group of talented University of New Orleans voice students. On August 3 at 8 p.m., they will present two short comic operas in one performance at Allways Lounge Theatre, with a second performance on August 4 at 8 p.m. at the UNO Rehearsal Hall.

“I think New Orleans needs a new and younger opera audience,” Kathleen says. “So we have decided to do two short, entertaining pieces, each only 30 minutes long.”

One opera, Cox and Box, has music by Arthur Sullivan, one half of the famous comic opera duo Gilbert and Sullivan. It tells the story of two men living in the same apartment, but who do not know each other, since one works days and the other works nights. When the landlord decides to double the rent for the same space and the two find out, the results are very entertaining.

The second opera, Trial by Jury, is a better-known piece by the Gilbert and Sullivan duo. That story is set in a court of law, where a jilted Angelina is suing her playboy fiancee Edwin for damages due to breaking off their engagement. It’s an amusing short piece filled with comic characters that Kathleen Westfall says will keep the audience engaged and laughing.

Because the whole program is operating on a financial shoestring, the operas will be presented by singers in contemporary clothes, accompanied by piano only. It promises to be a cheerful and entertaining peek at some rising talent singing some charming music.

Sharon Litwin is president of NolaVie. New Orleans was once know as the opera capital of North America. The first week of August, adjunct UNO Professor Kathleen Westfall hopes to reclaim a little bit of that legacy with the debut performance of her 9th Ward Opera Company.

Westfall started the group to give local opera students an opportunity to hone their craft during the summer months. “Since Katrina the budget has been cut pretty severely, so the students who are trying to become singers don’t really have any performance opportunities,” she says.

The company will stage two comic, one-act operas with piano accompaniment. Gilbert and Sullivan’s early collaborationTrial by Jury is a courtroom satire concerning a marital lawsuit. Arthur Sullivan’s pre-Gilbert Cox and Box is the story of two men—one who works during the day and one who works during the night—who unknowingly share the same apartment. Comedy ensues when they run into each other for the first time. “Each of the operas are half an hour long,” says Westfall. “I figure that when people think of opera they think, ‘long, boring, Italian, not gonna go.’ So I wanted to do ‘short, English, funny, maybe I’ll go.’”

“I want to do something every summer,” says Westfall. “I think that maybe in the future it could become a summer program, which is something that Louisiana doesn’t have. But right now I’m happy to keep it small and just get these students performing.”

The 9th Ward Opera Company will present two performances, at the Allways Lounge on August 3rd and at UNO on August 4th. For more info email 9thWardOpera@gmail.com.

The University of New Orleans hosts two performances on Saturday by The Ninth Ward Opera Company. The New Orleans-based nonprofit opera company, named for a city ward devastated in the aftermath of Hurricane Katrina, is directed by UNO adjunct faculty and alumna Kathleen Westfall and includes several students, including graduate assistant Danielle Wilson.

Tantalizing audiences, the opera company will first perform Cox and Box, a libretto written by F. C. Burnand with music by Arthur Sullivan. The one-act opera tells the story of two men who are living in the same apartment but do not know it. One man works during the day and one at night, so the landlord decided to take double the rent for the same space. The two men find out about the scam during the course of this opera — and the results are bound to entertain.

(Also known as The Long-Lost Brothers, Cox and Box was renamed for the 1847 farce Box and Cox by John Maddison Morton – and was Sullivan’s first successful comic opera. Sullivan composed the piece with Burnand in 1866, five years before he wrote his first opera with W.S. Gilbert, launching a 25-year partnership called Gilbert and Sullivan.The Victorian-era writing team of librettist W. S. Gilbert and composer Arthur Sullivan together wrote 14 comic operas between 1871 and 1896, including H.M.S. Pinafore, The Pirates of Penzance and The Mikado.)

For their second performance at UNO, the Ninth Ward Opera Company will perform Trial by Jury, a well-known opera by Gilbert and Sullivan. Set in a court of law, a jilted Angelina sues her playboy fiancé Edwin for damages after he broke off their engagement. The opera includes a cast filled with comic characters determined to keep audiences laughing.